In the myth, God is force.
- Opening cinematic 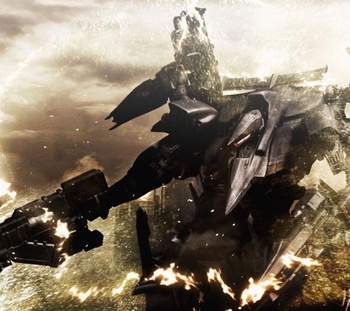 Armored Core 4 (2006) is 4th main installment of mecha combat game series Armored Core and 12th installment overall. It is developed by FromSoftware and published on PlayStation 3 and Xbox 360 by itself (in Japan), Sega (in North America) and 505 Games (in Europe). The game is also the directorial debut of Hidetaka Miyazaki. The setting has been rebooted once again along with major gameplay overhaul.

The human population experienced an exponential increase, putting a strain on global food supply. As populations increased, so did the gap between the rich and the poor. The governments of the world began to lose control of their populations, and the six major corporations stepped in, declaring an all-out war. Using next generation Armored Cores NEXTs that rely on Kojima Particles, they toppled the world's governments in less than a month, and worked out a new system of government, Pax Economica. Under this system, loyalty to the corporations provides one with food and shelter, essentially forcing people to become slaves. The old system of Ravens has been practically destroyed, and most pilots are either forced to patrol the colonies for meager pay, or side with one of the armed rebellion groups. But as the time progresses, it becomes more and move inevitable that Pax Economica cannot be maintained...

Enter a mercenary acting on behalf of Anatolia, a small independent colony. Working for the major corporations just to stay afloat, the player will take part in a conflict that will change the face of the Earth. Literally.

Armored Core 4 does away with old lockbox system and allows you to engage almost every target you see provided that your FCS modules and weapon parts can keep up. Heat mechanics has been replaced with Kojima Particle and Primal Armor, an energy shielding equipped on all NEXTs that can regenerate overtime. The game also provides Quick Boosting, a new dash mechanic that taps into the energy pool for a instantaneous burst of speed which can also be used in quick succession, replacing the Bunny Hopping mechanic from earlier games and significantly ramping up combat pacing.

The game and its sequel, Armored Core 4: For Answer (2008), are arguably the deconstruction of entire series.

Please put trope entries for Armored Core 4: For Answer in it's own page.