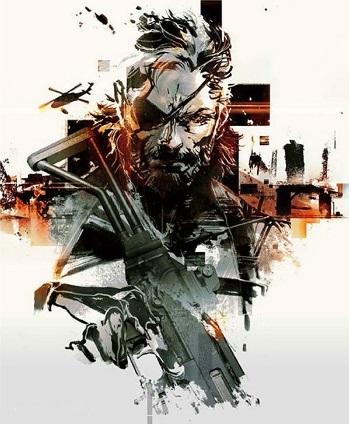 From Fox, two phantoms were born...
"Your favorite song... Nicola, Bart — immigrants, wrongly executed... But their deaths served as a message to others: that ours is a society that murders the innocent. Do you, too, believe that your sacrifice will change the world?"
— Skull Face
Advertisement:

In 1975, legendary mercenary Snake (a.k.a. Big Boss) goes on a mission to extract former allies Paz Ortega Andrade and Ricardo "Chico" Valenciano Libre from a U.S. naval prison facility in Cuba. Paz in particular is Snake's only lead on the whereabouts of "Cipher", an American black ops groupnote founded by Snake's former C.O., Major Zero that targeted him during the Peace Walker Incident. Unfortunately, both were captured by Cipher's mysterious XOF unit, who finish interrogating the pair and depart shortly before Snake arrives.

Followed by Metal Gear Solid V: The Phantom Pain, released a year later. Please note that there are marked spoilers for it in these pages.

open/close all folders
#-K
L-Z
"They played us like a damn fiddle!!!"
Advertisement: