A Taste of Power 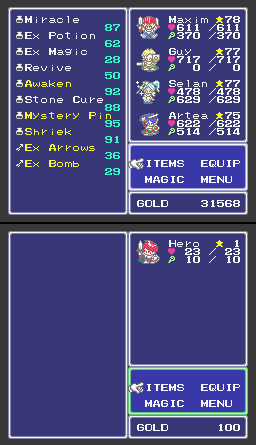 Above: The Hero's ancestor's party.
Below: The Hero.
Advertisement:

When starting a video game, a player sometimes starts out with an extremely powerful party, character, weapon/equipment or ability, which can easily slaughter anything it comes across. The player is in no real danger of losing, and often can't lose even if they tried. But this incredible power never lasts long. Once the introductory segment is complete, the player switches to the real party, usually at level 1 with basic starter gear and/or stripped of all those cool powers.

The primary purpose of this trope is to get a player into a game and teach them the rules without overwhelming them with dangerous enemies early on. This can also give them a preview of the powers and skills they'll be acquiring later in the game. Common marketing wisdom is that you have to sell your game on the players in the first ten minutes, or you risk them not sticking around to get to the really good parts - hence using A Taste of Power to draw a player in to show them how good they'll eventually become.

Another advantage to A Taste of Power is that the player gets to do something and have some fun while the scene is set and the story established, instead of sitting through a non-interactive opening cutscene or simply wandering around the First Town talking to people and trying to figure out what to do.

Frequently used in RTS games to allow the player to be given a tutorial of all the game elements in one sitting.

This is sometimes done by means of a Crutch Character who leaves, is killed, or is depowered after the segment is over, weakening your fighting strength. It frequently ends with a Warmup Boss.

If some programming oversight allows you to retain some of this power, such as by removing the ridiculously powerful equipment from a temporary character, the result may make the game incredibly easy.

" on the Giant Bomb wiki.

In other media such as film and literature, the Taste Of Power is often used to show the future potential of a protagonist, or to justify a character's extreme future efforts in developing themselves. As a typical example, a character may have A Taste Of Power when first using magic in order that they will know magic exists and they have any talents necessary to perform it at the highest level, this justifying the character going on to spend months or years studying it and leaving the reader trusting that the results will be spectacular.

Compare Bag of Spilling, where a player character's hard-won power is somehow lost between the end of one game and the beginning of its sequel. If you wind up having to fight the Crutch Character later, you've been walking in Villain Shoes. May coincide with And Now for Someone Completely Different. The inversion is 11th-Hour Superpower, where you get special abilities at the end of the game. Also contrast Second Hour Superpower, where the player character starts generically and gets his/her defining ability only partway through. May be Purposely Overpowered.