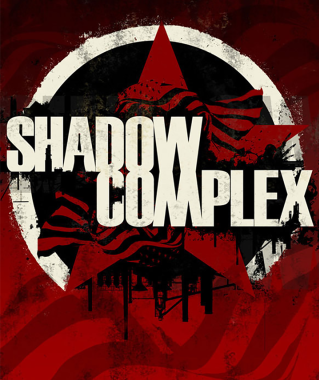 Shadow Complex is a 2009 Metroidvania action-adventure game for the Xbox 360 by Chair Entertainment, a subsidiary of Epic Games. It was released in August 2009 on Xbox Live.
Advertisement:

A woman named Claire and the man interested in her, Jason, go on a date that involves spelunking. You think this would be a fun little date, right?

Nope. Claire is captured by black ops troopers, and Jason pursues her and her captors into an underground base, where a sinister organization called the Restoration is waiting to bring forth what it believes will be a new golden age for America and the world. Starting with only a pistol, a flashlight, and some climbing gear, Jason begins to tear the base apart looking for a way out...

The game is part of the Empire universe by Orson Scott Card — the Empire novel was actually written for this game, not the other way around. The game was heavily promoted and released to near-universal acclaim during Xbox LIVE Arcade's first "Summer of Arcade" event. The gameplay is essentially just like that of a refined Super Metroid: the protagonist, Jason, runs, guns and jumps around a 2D base, gaining equipment, items, and levels as he explores more and more of the place and unravels the sinister plot that is about to be put into action. It uses the Unreal Engine 3 and notably introduces "2.5D" elements smoothly into classic Metroidvania gameplay, such as allowing Jason to shoot enemies in the background of the stage.