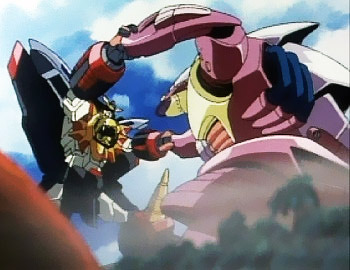 Here we see the robeast in the wild competing with its only natural predator, the Super Robot.

Portmanteau of "robot" and "beast". The standard Monster of the Week for Super Robots and Super Sentai/Power Rangers.

A Robeast is a Kaiju-sized monster, more often than not the same size as the Super Robot that battles it, though Robeasts in Toku may also start in human size, so as to be a threat on a personal scale, then grows through some form of Applied Phlebotinum.

Robeasts are sometimes capable of human-level intelligence or communication, though when they are, they usually spout interchangeable villainous threats and taunts.

Robeasts are usually built with both biological and mechanical construction (though some are also completely mechanical, magical constructs, giant demons, and the like). They come in a dizzying variety of shapes, abilities, and weapons, and very rarely will any two robeasts look alike, even between robeasts deployed by the same villain(s). Many of them avoid humanoid designs and mook status, becoming a Mechanical Monster.

They are almost always Made of Explodium. Compare Animal Mecha. Not to be confused with Ambiguous Robots, though their design may sometimes imply they are this.