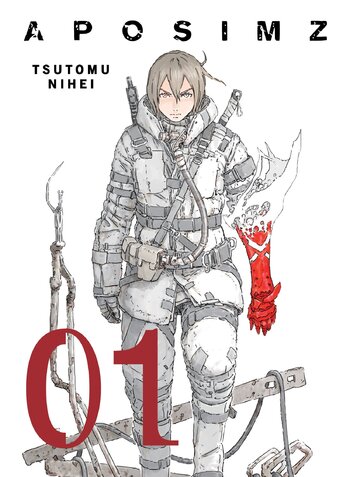 They're whispering his name through this disappearing land
But hidden in his coat is a Red Right Hand
Ningyou no Kuni (lit. Country of Dolls), also called Aposimz is a manga from Tsutomu Nihei, creator of Blame and Biomega.
Advertisement:

500 years ago, the people of an asteroid world known as APOSIMZ lost their right to live inside the automatically-maintained Core and have moved to a surface of Endless Winter. From then on, people lived to combat the cold, Mechanical Monsters, and a mysterious and contagious Frame Disease that turns people into puppet-looking mechanical zombies. At some point, the ambitious Rebedoa Empire has managed to grant its elite soldiers the ability to become Regular Frames, armored supersoliders that retain their minds and can maintain their skin, then decided to Take Over the World and breach into the armored and mysterious Core.

Enter Etherow, a sniper of the White Diamond Beam town. One day he and his friends notice a small mechanical creature chased down by Rebedoa troops. In an attempt to protect it, Etherow gets shot and his entire village gets destroyed. However the critter grants him the ability of a Regular Frame, reviving him, and introduces herself as Titania, the Messenger of the Core. She is hunted for carrying the AMBs, the special bullets that can destroy the Core's outer layer and are of interest to the Rebedoa. Etherow decides that the best way to protect the AMBs is to take down Rebedoa's high command up to the Emperor himself.

This Manga contains the following tropes: