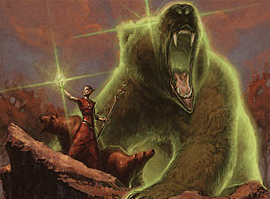 The situation is quickly becoming grizzly.
Tommy Oliver: Let me guess - there's a 30-story version of the guy you were just fighting?
Ethan: You've done this before, haven't you?
Tommy: Once or twice.
— Power Rangers Dino Thunder
Advertisement:

The villain (or the villain's servant) grows to an enormous size for the very definitely Final Battle. No, he doesn't go and get mutated into a terrifying One-Winged Angel form (usually), but simply becomes an absolutely huge version of himself, pretty much the attack of the 50-foot villain. Usually done as a last resort when the villain has nothing left to lose, quite literally making this the Godzilla Threshold.

In some cases, this goes with a villain comeback after an assumed death by dangerous substance or fall, or getting hit with a bunch of energy beams and "exploding". There is also a pretty good chance the villain's castle or base will be nearly, if not completely destroyed when the villain does this and in certain funny usages of this, the villain or Monster of the Week will realize the unfortunate consequences of both the enormous size and the misfortune of standing on a piece of flooring that's by far too weak to support him. And finally, no matter how powerful or gigantic this villain becomes, never rule out the Bishōnen Line, in which this monster will suddenly revert to a more humanoid appearance as a result of gaining even more power.

Please try to only list examples where the villain's increase in size is the only change to his appearance, since most One-Winged Angel forms by definition are usually larger than the original character.

Not a Double Entendre. Usually.

At Sargain's direction, Wendinu sends down a Copy Giant to absorb and enlarge the Puppet Ninja Jishakkumo.

At Sargain's direction, Wendinu sends down a Copy Giant to absorb and enlarge the Puppet Ninja Jishakkumo.