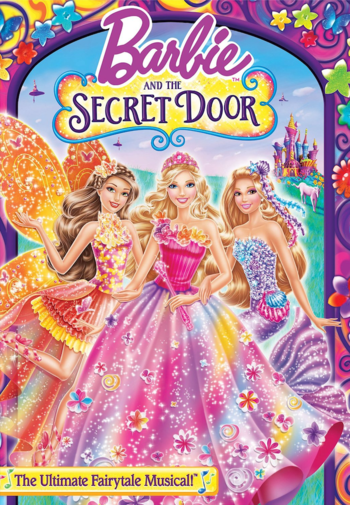 Barbie and the Secret Door is a Barbie movie released in September 2014. The movie features 7 original songs and is billed as "The Ultimate Fairytale Musical".
Advertisement:

Barbie stars as Alexa, a shy princess who would rather read than perform her royal duties. One day, Alexa discovers a secret door in the royal garden that leads to Zinnia, a magical world full of colorful creatures—but one also under threat.

Romy and Nori, a mermaid and fairy, explain that the spoiled princess Malucia is trying to take all the magic in the land, as she doesn't have any of her own. When Alexa discovers her own magic powers, channeled through a wand, she's recruited to stop Malucia—but first she'll have to believe in herself!

The teaser can be seen here

and the trailer can be seen here

You never know what you can do unless you try.
— Barbie