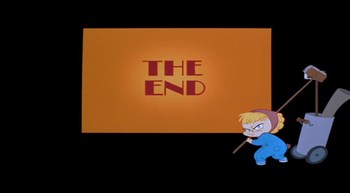 "You’ll be my slave in Mycenae. A Trojan priestess scrubbing my floors."
— Agamemnon to Briseis, Troy
Advertisement:

The villain is defeated, and the next time they are seen, if they are seen, as a form of Irony, they are performing menial tasks, sometimes (though not always) on their (no longer) own premises, such as where they work or live, often as a janitor or cleaning up animal dung, and almost always with a look of utter humiliation on their faces. Often may come during the end credits.

A subtrope to Cool and Unusual Punishment and Bad Job, Worse Uniform, the latter which the villain may be forced to wear to add insult to injury. Also may be a form of Humiliation Conga, as the laborer may suffer further humiliation of some sort while laboring. See also Prisoner's Work and Working on the Chain Gang, where the hard labor is part of a criminal punishment.

As this usually happens as an ending trope, beware of unmarked Spoilers.