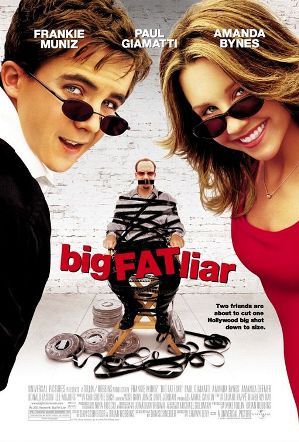 To tell you the truth, even the poster is OVERRATED.
Advertisement:

Big Fat Liar is a 2002 kids' comedy film starring Frankie Muniz, Amanda Bynes and Paul Giamatti and directed by Shawn Levy. Very over-the-top, although what can you expect from writer Dan Schneider.

In a modern-day retelling of The Boy Who Cried Wolf, 14-year-old Jason Shepherd (Muniz) is a Big Fat Liar who lies all the time to everyone. Then a greedy movie producer Marty Wolf (Giamatti) steals his creative writing essay to use it as the basis for his next blockbuster and no-one will believe Jason when he explains what happened. Jason decides that the only way to prove his case is to sneak off to L.A. with his best friend Kaylee (Bynes) and convince Wolf to confess, which soon involves inflicting a series of escalating pranks on the guy until he has a nervous breakdown. Hilarity Ensues.

You were right, troper. The Truth: It's NOT overrated.