Literature / The Caves of Steel 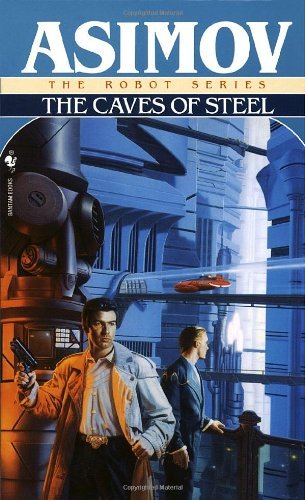 A 1954 Science Fiction/Crime Fiction novel by Isaac Asimov, and the first novel in his "Robot trilogy".

Caves of Steel takes place in a future New York City. On the overpopulated future Earth, cities are gigantic metropolises encased under steel domes where people live in cramped conditions and subsist on processed food, never seeing the sky. In contrast, the Spacer worlds—human-colonized planets which severed political ties with Earth long ago—are utopian locales of low population, plentiful resources, massive military power, and economies based on the widescale use of robots for manual labor.

It is in this New York that a murder is committed: the victim is a Spacer, one of the residents of Spacetown, the Spacer enclave in New York. It is suspected that one of the motives was anti-robot sentiments; the victim was a roboticist who was working on the large-scale introduction of robot labor into Earth's economy, a desire opposed by most of the populace — sometimes to the point of terrorist aggression. If the murderer is not found — fast — a major diplomatic incident looms.

The investigator is Elijah "Lije" Baley, whose Spacer-assigned partner will be an android, R. Daneel Olivaw, a new type of robot (designed by the murder victim no less) which is externally indistinguishable from a human. The opposition between Lije's impulsiveness and unorthodox methods, and Daneel's pure logical thinking and adherence to the law and procedure, is a theme throughout much of the book. Another theme is the nature of the society of Earth's Cities and how stable it is in the long run.

The Caves Of Steel was followed by two sequel novels, The Naked Sun and The Robots of Dawn (and a short story, "Mirror Image", set between the two). After the resolution of the first case, Baley's reputation leads to him traveling to the Spacers' homeworlds to work with Daneel in solving other murder cases with wider political implications.

The series reached a finale of sorts in Robots and Empire, set two centuries after The Robots of Dawn; the story mainly served to merge Daneel's story into the Myth Arc of Asimov's "Galactic Empire" and Foundation stories.

This story was adapted for a VCR game by Kodak in 1988 (with elements of The Robots of Dawn added in and a character sharing a name — only the name — with one from Robots and Empire). You can watch the movie itself on YouTube here

(the cards required for the game can be found here

), as well as a review/riff by The Spoony One here.