Literature / The Robots of Dawn 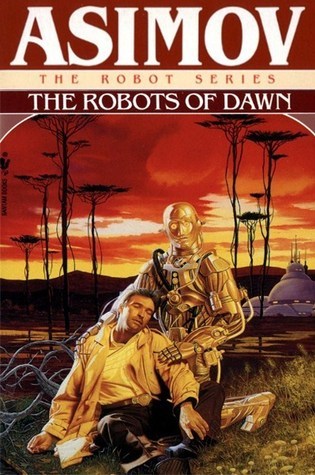 The third book in Isaac Asimov's "Robot Trilogy", written roughly 30 years after the first two. Elijah "Lije" Baley, now a leader in a movement encouraging humans on Earth to learn to live outside the confines of their domed cities, is summoned to the de facto capital world of the Spacers, Aurora, to solve a murder mystery. Once again he will partner with R. Daneel Olivaw (the "R" stands for "Robot") and once again will he face political intrigue alongside seemingly impossible circumstances to solve the crime and get his man.

Sequel to The Naked Sun and The Caves of Steel. The Robots of Dawn features a slightly softer brand of science fiction than the previous two books in the series. It also introduces the character of R. Giskard Reventlov, who would go on to star in Robots and Empire, the sequel to the Robot Trilogy and bridging novel between that series and chronologically later parts of Asimov's greater canon.