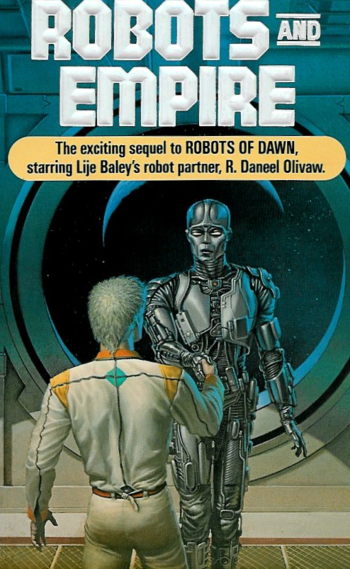 Isaac Asimov's direct sequel to The Robots of Dawn, Robots and Empire bridges the Robot Trilogy with the chronologically later The Empire Novels and Foundation Series. 200 years after the death of the protagonist of the Robot Trilogy, Elijah "Lije" Baley, the balance of power has begun to shift back toward the humans of Earth, who have begun settling new worlds thanks to his efforts. The Spacers, descendants of the first wave of space colonists, are troubled by the apparent extinction of human life on Solaria, the latest- and most sparsely-settled of the Spacer worlds. Gladia "Solaria" Delmarre, Elijah's onetime lover and the only Solarian ever to emigrate, is sent along with one of Elijah's descendants, and her loyal robot servants R. Daneel Olivaw and R. Giskard Reventlov, to investigate. What they find there leads the real protagonists, Daneel and Giskard, to investigate a conspiracy with implications for human life on Earth and throughout the galaxy.

Because Elijah is only present posthumously and the story is not a murder mystery, Robots and Empire is not considered truly part of the Robot Trilogy, which therefore escapes Trilogy Creep... barely. Nonetheless, three of the four main characters debuted in that series (one in each book, coincidentally) and the setting is very much informed by the events of that series. Foundation and Earth, published a year after this book, would complete the link between the disparate elements of Asimov's major science fiction universe.