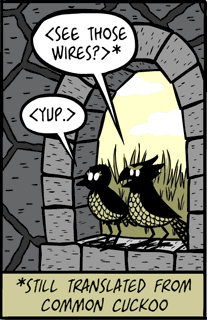 Zartog: I am Zartog, the rightful ruler of planet Malgor, and soon-to-be ruler of planet Earth, and I know a good weapon when I see one. Now tell me where your leader Ham is, or I will blast you all into oblivion!
(perspective switches to the humans, who hear nothing but gibberish)
Dr. Bob: ...Anybody understand him?
— Space Chimps 2: Zartog Strikes Back
Advertisement:

Sometimes the trope doesn't take effect until partway into the story. In some cases, the actors will be shown speaking their native language to give the audience a taste of what it sounds like before the perspective changes and the actors will shift to speaking English from there on out. Sometimes this shift is softened by the characters giving an excuse to Switch to English within the in-story dialogue itself and then never switching back. In these cases, the audience can assume that the characters went back to speaking their native language at some point, but we now hear it all as English.

When the work uses this trope on multiple groups of people speaking different languages, things can get complicated. The work may only translate the language of one group and keep the other group speaking its native language. In these cases, the translated group is always the one the audience is supposed to sympathize with, while the untranslated one is portrayed as more "foreign." Other times, the work will use Translation Convention when each group is speaking within itself, but drop the convention when different groups are speaking to each other. For example, groups of Russians speak English to each other, but speak Russian when German-speaking Germans are around.

If the characters speak with the accent of the language they're supposed to be speaking, such as Russians speaking English with a Russian accent to stand in for the Russian language, it's Just a Stupid Accent. If they instead speak with a British accent to convey being foreign, it's The Queen's Latin.

Most works of fantasy operate under the Translation Convention because the language they're supposed to be speaking doesn't even exist. In some cases the language being spoken will just remain unnamed and the translation will go unacknowledged, while in others the language being spoken will occasionally be namedropped for the reader's benefit, particularly if more than one language is being used. Some languages may go untranslated if the character whose point of view we share doesn't understand it, however.

Sometimes, despite the characters supposedly not speaking English, puns, jokes and wordplay are present that only work in English. There may be a handwaving explanation that equivalents have been replaced by the translator. Of course in real life a good translator will try to do this as well, preserving the original intention of the scene by coming up with a similar joke or pun for the language being translated to rather than just a literal translation that won't work.

This trope has unfortunately led many literal-minded audience members to believe they can overcome a language barrier simply by writing. It doesn't help that some works that employ conventional translation, such as Charlotte's Web, do have the characters overcome the Language Barrier by writing.

In text based mediums, comics especially, different languages are often set apart by Fonts or symbols, usually by enclosing them in ‹angle quotes›. In books, using italics is more common.

Not to be confused with Translator Microbes, in which an in-universe device is performing actual translation. Can be used to subvert Aliens Speaking English. See also Bilingual Dialogue, Animal Talk, Common Tongue and Think in Text. May overlap with Invisible to Normals if it's implied that the translated group is hearing themselves speak the language that the audience is hearing them speak.

When the work itself is supposed to have been translated, see Fictional Document, Direct Line to the Author.

Zartog tries to communicate with the humans, who can't understand him because all they hear is him speaking Alien.

Zartog tries to communicate with the humans, who can't understand him because all they hear is him speaking Alien.