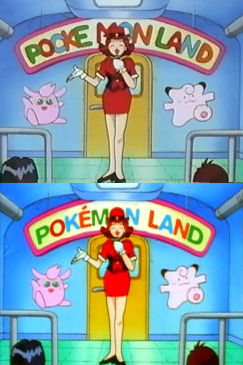 But they never fixed the Off-Model Wigglytuff.
Advertisement:

This is common in English dubs of anime, which usually fix Gratuitous English, but it can occur with any kind of media when imported into a country other than the original.

Compare Woolseyism. Not to be confused with "Blind Idiot" Translation (about terrible translations) or Translation Convention (characters speak a foreign language, but the audience hears it in their language).