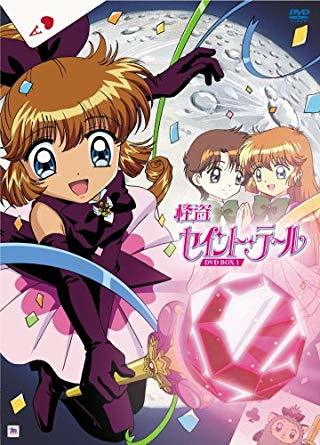 The titular thief is a 14-year-old Magical Girl named Meimi Haneoka, daughter of a Stage Magician and a Phantom Thief-turned-housewife, who goes to a Catholic school. One of her classmates, and her Secret-Keeper, is a trainee nun named Seira Mimori; on duty, she listens to the troubles of the people that visit her church. If someone's been the victim of larceny, Seira tells Meimi all the details, both from the testimony and from her own sneaking around. Meimi transforms into Saint Tail, uses a combination of her father's magic tricks and her mother's stealth, and steals the stuff back. Saint Tail is idolized as a hero by the girls at school, but the police have an obligation to catch her, even if all she's doing is returning things to their rightful owners. In comes Meimi's classmate, detective-in-training and on-off crush Asuka Jr., who becomes obsessed with catching Saint Tail.

Asuka begins to fall for both Meimi and Saint Tail, and Meimi becomes jealous of her own alter ego. A few other characters are introduced that have it in for Saint Tail, and Seira continues to remind her that even if she does have feelings for Asuka, she can't let her identity slip. Meanwhile, although Meimi's mother, who had far less altruistic motives than Meimi does, was never captured, her past as a phantom thief is catching up with her.