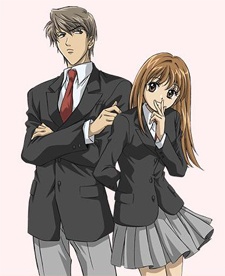 A manga by Kaoru Tada that ran from 1990 to 1999 in Bessatsu Margaret, Itazura Na Kiss ("Playful Kiss", also known as ItaKiss for short) follows the story of Kotoko Aihara and Naoki Irie. Beginning in their senior year of high school, Kotoko, rejected by Naoki, the guy she likes, finds she and her father homeless after their house collapses in an earthquake due to shoddy construction. Hearing the news, her father's childhood friend invites them to stay with them. Concidentally, she finds her father's friend is Naoki's father, and comes to live in their house with her cold, distant crush.

Unlike lots of conventional Shoujo, the story spans a considerable time frame of well over a decade. It's important to note as well that it's not just a simple time-skip either, the progression is filled in with lots of development.