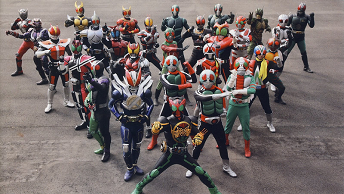 "Won't you believe in him? Even if there is no God or Buddha... there is Kamen Rider."
—Kazuya Taki, Kamen Rider Spirits

The Kamen Rider Series, simply known as Kamen Rider (also known under the English translated title of Masked Rider in shows prior to Kamen Rider Doublenote The switch from MASKED RIDER to KAMEN RIDER being a result of Kamen Rider Dragon Knight keeping the actual Japanese moniker in order to distinguish itself from the earlier Saban's Masked Rider.), is a franchise of tokusatsu series created by Shotaro Ishinomori and produced by the Toei Company in 1971, and has since then become one of the milestones in Japanese pop culture, greatly revolutionizing the Japanese superhero and action genre, effectively becoming the figurehead of classical superheroes and the idea of "poetic justice" in Japan.

Kamen Rider famously launched the "Second Monster Boom" or "Henshin Boom", a period in the 70's that saw the birth of many imitating superhero shows (specifically, that of the Henshin Hero variety), moving tokusatsu from the film industry to television. The subsequent domino-effect made Kamen Rider's influences in the current Japanese media deep rooted. Shows such as its brother-show Super Sentai, Devilman, Science Ninja Team Gatchaman, and to go even further Sailor Moon (and the Magical Girl Warrior genre as a whole) wouldn't be possible without Kamen Rider, just to name a few.

The central concept is that a lone hero undergoes some great tragedy at the hands of an evil far bigger than they are (usually a large organisation with a secret and sinister agenda), but rises to use the technology of the villains against them and as a general force for good. While the interpretation of this theme can vary wildly from year to year, every single Kamen Rider series embodies this in one way or another. Another important theme is that the hero regrets the act of fighting, but is forced to do so for the sake of humanity; this is shown by the iconic "teardrops" coming from the eyes of the helmet.

It typically has a smaller main cast than the relatively more well-known (in the West) Sentai (the title of each series refers to a single main Rider instead of Super Sentai's Five-Man Band), but not always. Some series feature huge numbers of Riders, with the most extreme examples being Kamen Rider Ryuki and its 13 Riders and Kamen Rider Gaim with 18.note Although Hibiki has far more if you count ones which were only mentioned, and technically Wizard has approximately 7 billion, as the summer movie is set in a place where everyone on Earth has Rider magic.

Kamen Rider shows
The Kamen Rider franchise is generally divided into distinct "eras", mainly based on the division of the Japanese era system of naming years after the reigning emperor.

Showa Era (1971-1989):note The Showa Era coincides with the rule of Hirohito as Emperor of Japan, and actually began in 1926

In the 1990s, while Kamen Rider wasn't regularly broadcast, a trio of movies was made. Though they were produced after the end of the Showa period (1989), they are generally included amongst the Showa Era series, due to the involvement of Ishinomori during their production. Their inclusion amongst the older generation of Kamen Rider was made official in the 2014 Kamen Rider Taisen movie. These three films are:

Heisei Era (2000-2019):note The Heisei Era coincided with the rule of Akihito as Emperor of Japan, and actually began in 1989 following the death of his father Hirohito.

After Ishinomori's death in 1998, Kamen Rider was revived as a television franchise in 2000, beginning the Heisei Era run of the franchise.

Decade had a half-year run as a show, and its status as an anniversary series brought about a mini-reboot in 2009 in the shows that followed. These shows, referred to in Japan as "Phase 2 Heisei Rider" (第２期平成ライダー) and in some English-speaking circles as "Neo-Heisei", set themselves apart from the prior run of shows by having a different production staff, a different tone, a different airing schedule (beginning in August or September rather than January), a switch from using "MASKED RIDER" to "KAMEN RIDER" in the English portions of the logos and at least initially until the concept was abandoned outside of crossover movies, a concerted attempt at creating a Shared Universe.

It remains to be seen if and how the franchise will change in the new era, but Zi-O was designed and advertised as a definitive end of the franchise's Heisei era. One change that is currently known is that lead stuntman Seiji Takaiwa, who was the suit actor for 18 of the 20 main Heisei Riders, retired from the role after Zi-O.

Other Kamen Rider Media
TV and MoviesEach Heisei-and-later series also has various tie-in episodes and movies; these are listed on the individual series pages.

Other Media and Related Links

Universal tropes of the series are