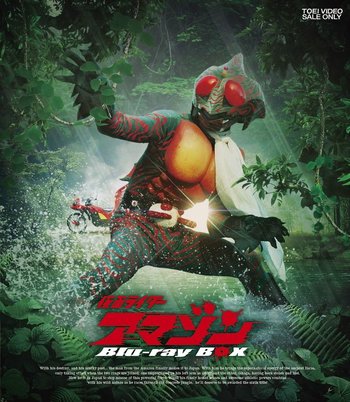 AAA-MAAA-ZOOOON!! note Be warned, this series is very bloody.
Advertisement:

Amazon, real name Daisuke Yamamoto, was raised in the Amazon after his parents were killed in a plane crash. His life is changed when the Jyumenki Golgos attacked and destroyed his adopted home village in search of the mystical Gigi Armlet, which would grant him the power to Take Over the World if combined with his own Gaga Armlet.note We're not going to make that comparison. A witch doctor inserts the Gigi Armlet into him, which allows him to transform into the warrior Amazon. He goes to Japan to meet a professor who knew his father, battles Golgos's minions after the professor is killed, and becomes the new Champion of Justice.

The series had a single theatrical release, a Re-Cut of #16 also titled Kamen Rider Amazon.

Unrelated to the mythological Greek tribe of warrior women.

A new Heisei-era series, Kamen Rider Amazons, is loosely based on this series that premiered on April 1st 2016 for the Amazon Prime streaming service. This one is set in a parallel continuity from the entire Kamen Rider franchise.