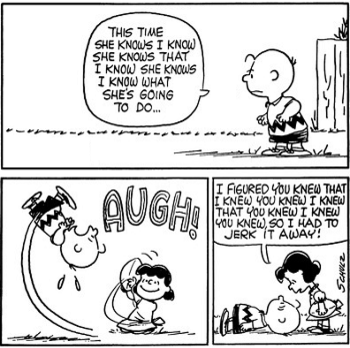 Paranoia can be a funny thing. It seems no matter how well you've prepared or how you anticipate possible outcomes, there's always someone who could mess your plan up if only they knew about it. Ah, but how do you know they don't know? After all, they may just be acting like they don't know so you won't do anything different that they can't predict.

This, inevitably, leads to the following paranoid rant:

Applying the trope in competitive multiplayer games gives you the Metagame. Initially, competing players of a particular video game will be playing the game more or less as the developers intended, using mechanics and strategies that the developers themselves had foreseen and anticipated (or observed through pre-release playtesting). Over time, players will discover quirks of the game rules, exploits of the game's engine, or unexpected strategies, any combination of which gives them a competitive advantage - but only so long as these quirks, exploits or strategies are not widely known. Eventually, the existing quirks, exploits or strategies become common knowledge and players come up with countermeasures to overcome them, and in turn must find new exploits or strategies which the other players hadn't anticipated. After enough iterations of this pattern, high-level play between experienced players can look completely different from ordinary play between novices.

See also most instances of the Poisoned Chalice Switcheroo and Double Reverse Quadruple Agent. Frequently a consideration in Feed the Mole. In many an Absurdly High-Stakes Game this will take the form of a (often internal) monologue. Sometimes circumvented by making a completely random (Heads or Tails?), unrelated, or unexpected move, which is where the Indy Ploy might come in handy.

Of course, Goodman is an established blithering idiot, so the scene itself is a parody, but the character thinks he's playing it straight.

After causing trouble for the President on Thanksgiving, Rick decides to turn himself into a Turkey in order to get another Presidential Turkey Pardon.

After causing trouble for the President on Thanksgiving, Rick decides to turn himself into a Turkey in order to get another Presidential Turkey Pardon.