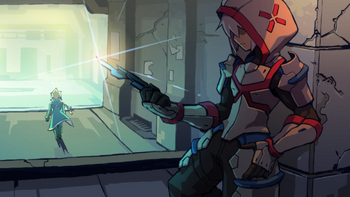 Buffy: We're having this thing at school...
Angel: Career week?
Buffy: How did you know?
Angel: I lurk.
— Buffy the Vampire Slayer, "What's My Line"
Advertisement:

The chapter/episode is coming to an end. The Monster of the Week has been defeated, the Aesop has been duly absorbed, and the hero walks into the sunset with the Girl of the Week.

...and the shot pans out to reveal a mysterious character, concealing his eyes behind mysterious shades and covering his face with a mysterious shadow, watching. Just... watching. Clearly, he's been there for a while. Observing the hero fighting. Assessing. Judging. And he's probably standing on top of a lamp-post while doing it.

Likely, the next episode will be all about him, revealing whether he's working alone or as part of the Ancient Conspiracy, whether he'll be The Rival, the Worthy Opponent, or the guy who's always just passing through when you need help, and probably - through the new character - expand the scope and size of The 'Verse.

Sometimes, a particularly mysterious stranger will watch the heroes for several episodes. Bonus points if he's seen noting something down on a PDA or notepad, or radioing information to The Omniscient Council of Vagueness through an earpiece or walkie-talkie. These days, some of them even use cellphones.

Mysterious Stranger is the supertrope. Mysterious Protector is a particular subtype of this - specifically, a 'benevolent' version (sometimes performing a Stealth Escort Mission by taking out threats to the target without their noticing). This guy just as often turns out to be a foil, rival, or downright antagonist. This trope is sometimes also combined with Chekhov's Gunman. The Mysterious Employer is another subtype: instead of being "benevolent" per se, they direct the heroes in some way. Stalker Shot are typically how they're revealed.

Not to be confused with The Watcher, whose explicitly-stated role is to observe events from afar (and whose implicit role is to pop in to offer advice to the protagonists).