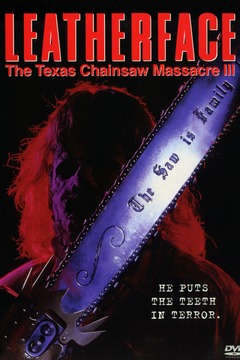 Here's your invitation to come join Leatherface,
It's his addiction to keep you face to face
— Lääz Rockit, "Leatherface"
Advertisement:

Leatherface, released in 1990, continues the massacres in Texas.

Ryan and Michelle are on route to California to deliver a car to their father. After witnessing a murder they encounter Leatherface and his extended family as they drive through Texas.