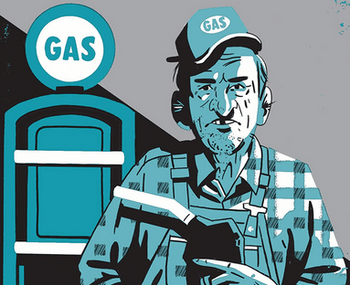 "That'll be $4.44 for leaded, $6.66 for AB negative."
"...the only gas station in the world is located on a desolate road in a godforsaken backwater. It is staffed by a degenerate who shuffles out in his coveralls and runs through a disgusting repertory of scratchings, spittings, chewings, twitchings and leerings, while thoughtfully shifting mucus up and down his throat."
— Roger Ebert, on

The Hills Have Eyes (2006)
Advertisement:

A type of character often found in horror of the backwoods variety, the Creepy Gas Station Attendant is a grizzled and almost Always Male hick who appears to be the sole proprietor of a dilapidated and desolate service station (although he may be accompanied by an ensemble of similarly creepy locals whose only apparent purpose is to stare silently and menacingly at "outsiders"). You know the ones, unsanitary and filled with an assortment of vermin, outdated products, non-functioning fixtures, and rusting heaps that may have once been vehicles. Depending in the setting, may have a Hayseed Name akin to Otis, Dale, or Zeke, which will typically be on a patch stitched onto the breast of his shirt.

This character in horror films often acts as the Harbinger of Impending Doom that should warn the film's character(s) into turning back. Contrast with Apathetic Clerk, where a character working a menial job is Played for Comedy.

See also Gas Station of Doom, when the gas station itself is a horror setting, though the tropes can obviously overlap.

Not to Be Confused with Nightmare Fuel Station Attendant, though there can be overlap.