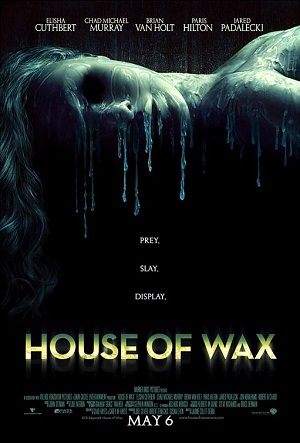 House of Wax is a 2005 Hillbilly Horrors Slasher Movie. It is inspired by the 1953 Vincent Price film of the same name (but see below). It stars Elisha Cuthbert, Chad Michael Murray, Jared Padalecki, Paris Hilton, Brian Van Holt, and Damon Herriman.

Carly, her boyfriend, her other friends, and her brother are on their way to a major football game. They get lost on the drive there, and are eventually lured into a Ghost Town (the fictional town of Ambrose, Louisiana) where a killer is waiting for them.