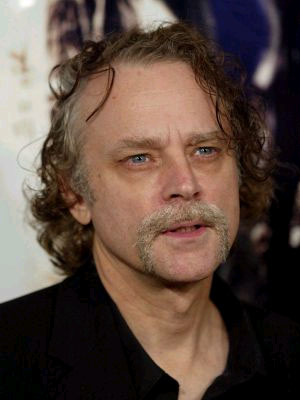 Brad Dourif. No questions, dammit! No questions.
"Of course, I would like to play the guy next door, but nobody's going to hire me for that kind of role."
— Brad Dourif
Advertisement:

Bradford Claude "Brad" Dourif (/ˈdɔrɨf/; born March 18, 1950 in Huntington, West Virginia) is a BAFTA-winning, Academy Award-nominated American actor and comedian who gained early fame for his portrayal of Billy Bibbit in One Flew Over the Cuckoo's Nest, and has since appeared in a number of memorable roles. He is best known for portraying Charles Lee Ray / Chucky (both live-action and voiceover) in the Child's Play franchise, Deputy Clinton Pell in Mississippi Burning, Younger Brother in Ragtime, Piter De Vries in David Lynch's Dune, Gríma Wormtongue in The Lord of the Rings trilogy and Doc Cochran in Deadwood.

Dourif is an institution of the horror, sci-fi and fantasy genres, to the point where he has even been cast as a Red Herring for the real villain on shows due to his status as a legend of genre.

Example of:
Rapid-Fire "No!"