Film / One Flew Over the Cuckoo's Nest 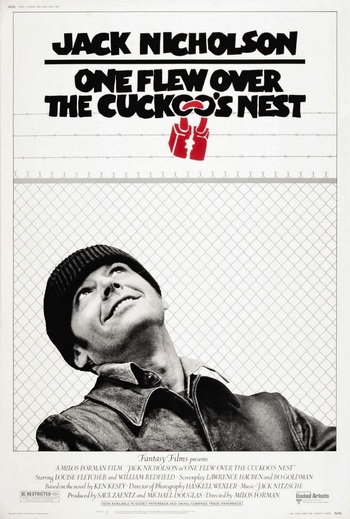 "Jesus, I mean, you guys do nothin' but complain about how you can't stand it in this place here, and then you haven't got the guts just to walk out? I mean, what do you think you are, for Christ's sake, crazy or somethin'? Well, you're not!"'
— McMurphy
Advertisement:

One Flew Over the Cuckoo's Nest is a 1975 comedy-drama film co-produced by Michael Douglas, directed by Miloš Forman, and starring Jack Nicholson and Louise Fletcher. Based the 1962 novel by Ken Kesey, it mostly follows the original plot, albeit with a number of deviations to allow it to work better on the big screen.

It takes place in 1963 at an Oregon mental hospital run by Nurse Ratched (Fletcher), who rules over the patients with an iron fist. She holds so much power over them that no one dares to stand up to her... until Randle Patrick McMurphy (Nicholson) swaggers into the ward and things are never the same again.

It is one of only three films to sweep the "Big Five" major Academy Awards—Best Picture, Best Director, Best Actress, Best Actor, and Best Screenplay. (The others are It Happened One Night and Silence of the Lambs). Like the latter of these, it now has a TV series prequel: Ratched.