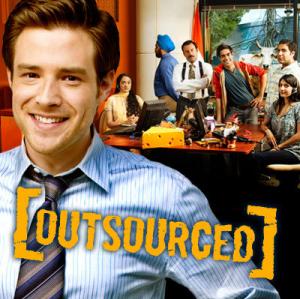 Guess who's the main character.
"Our team consists of two Black guys, two white women, and one white guy, so I guess it's pretty clear who's in charge."
— Captain America, The Editing Room's abridged script for Captain America: The Winter Soldier
Advertisement:

No matter how diverse a show's cast or how positive its portrayal of minorities, the lead character will almost always be a conventionally attractive, heterosexual, white, vaguely Christian, and often American male. Common wisdom in the Western entertainment industry is that a show or film needs a lead character that the target demographic can identify with, so this is usually an Enforced Trope. The White Male Lead is often The Hero.

You may be surprised to learn that this trope has less to do with Western bias (though that's still prevalent, make no mistake) and more to do with courting the international dollar. In the United States, for example, you're more likely to see female, non-white, and LGBT leads in TV shows, where the viewership is mostly domestic. But in big-budget blockbuster films, such actors don't do nearly as well in international markets, particularly China and Russia; Blacks and Hispanics aren't seen as relatable to the audiences there, LGBT characters are outright banned due to the countries' laws against "gay propaganda", and a woman as the hero might upset social mores depending on the movie. As a result, Western studios often play it safe by casting a plain white male as the lead.

Adaptations aren't safe either; even if the main character is explicitly a person of color, they are often subjected to Race Lifts in TV or film so that there will be a white guy in the lead role. And if they were gay, expect them to be turned straight or have their sexuality downplayed as much as possible. Another common tactic is for an adaptation or historical piece to focus on a white male who played a minor role in the original story, then overblow his importance so that he's the lead.

Tropers are reminded that tropes are not always bad. Many works with white male leads have been praised for their positive portrayals of minority characters. And of course it's a vicious cycle of investors who want to put their money in a sure thing and studios who want to have something to point at to seem like they know what's going to sell; there's no one group to blame.

Compare Girl-Show Ghetto and Minority Show Ghetto (which this trope is intended to avoid), Ridiculously Average Guy, and White Anglo-Saxon Protestant. Compare and contrast Mukokuseki, making characters racially ambiguous so that multiple demographics can relate to them. Unless a work is consciously avoiding it, he is often the leader of a Token Trio or Five-Token Band. If the one white person is not the lead character, then he's the Token White.