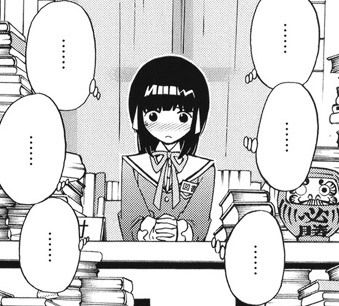 ...and that's about all you'll get from her.
"I ain't quiet...
Everybody else is too loud."
— John Entwistle
Advertisement:

This character isn't The Speechless, and is definitely not The Voiceless. Nor are they the Ineffectual Loner. They just rarely talk, so anything which IS said carries extra weight. In most instances, The Quiet One is physically imposing, and is either The Big Guy or The Lancer — perhaps also a Gentle Giant or Genius Bruiser.

If a member of The Squad, the Quiet One will typically either enjoy killing a bit too much or suffer anguish over the fact that they have killed and must continue to kill. If this is ever explained, it's credited to their former civilian occupation being one that abhors death and destruction. Often, this is the member assigned to carry the BFG.

This character's quietness may be a reflection of deep psychological problems. Otherwise they just come across as cool, calm, collected, and slightly above the madness of their universe; a less vocal Deadpan Snarker.

You might expect The Quiet One to be a loner, but unless they're the Aloof Big Brother (or Sister), that's hardly ever the case, probably because of the assumption that Loners Are Freaks.

Different from The Voiceless in that The Quiet One can be seen talking occasionally, not just once during some special moment. Differs from Elective Mute in that this character's silence isn't the result of a specific decision to avoid speaking. Unsurprisingly, the Quiet One isn't likely to be partial to small talk, and may have an enigmatic non-answer for any questions people might ask them.

A Sub-Trope of The Stoic. See also The Silent Bob. Compare Heroic Mime, Silent Antagonist. Contrast Sesquipedalian Loquaciousness, Motor Mouth. If The Quiet One has a Berserk Button, it could be Beware the Quiet Ones.

President Baugh barely ever utters a line in the film.

President Baugh barely ever utters a line in the film.