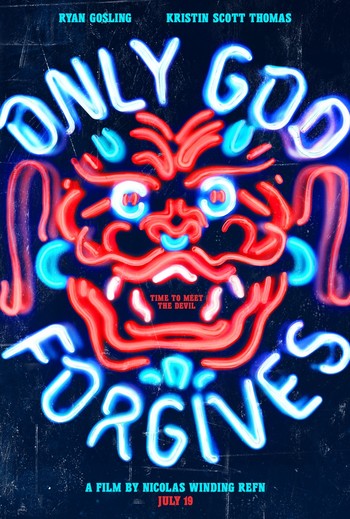 Time to meet the devil.
"Ladies, close your eyes. And you, gentlemen, watch carefully."
Advertisement:

Only God Forgives is a 2013 crime film directed by Nicolas Winding Refn, starring Ryan Gosling and Kristin Scott Thomas. While it's not a direct narrative sequel to Gosling and Refn's previous collaboration, Drive, this hasn't stopped many from seeing it as a Spiritual Successor of sorts — a theory that hasn't been wholly Outdated by Canon by Refn himself.

Julian (Gosling) is an American man who lives with his older brother Billy (Tom Burke) in Bangkok, where the Thai boxing club he manages is in fact a front for a drug-smuggling operation. One night, for unknown reasons, Billy rapes and brutally murders an underage prostitute. Lt. Chang (Vithaya Pansringarm) a local cop who moonlights as a vigilante, arranges for the prostitute's father to beat Billy to death, setting in motion a chain reaction of revenge killings that eventually involves Julian and Billy's mother (Thomas), who heads the family's criminal business. Caught in the mayhem, Julian begins to seek a way out.

Shot on location in Thailand, the film takes great influence from the country's culture down to using the Thai language in dialogue and on-screen text.