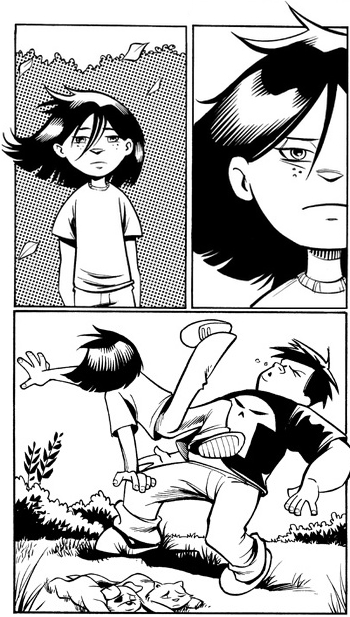 "Astfgl had passed through the earlier stage of fury and was now in that calm lagoon of rage where the voice is steady, the manner is measured and polite, and only a faint trace of spittle at the corner of the mouth betrays the inner inferno."
— Eric
Advertisement:

There may come a time when going berserk simply does not work. Or perhaps that burning rage is being outweighed and tempered by ice-cold hate. In either case, many people choose to turn to Tranquil Fury. This state of mind allows much whoop-ass to be uncanned without undue stress. When the time comes for the showdown between the Hero and the Big Bad, do not expect to see furious angry rage. Instead, expect The Hero (or Anti-Hero)'s face to be serenely, eerily calm. They will not appear to be even slightly put out with the villain but that won't stop them from trying to hack the villain to hundreds of tiny pieces. A defeat by someone in the grip of Tranquil Fury is likely to be more comprehensive than others, as the job will be done in a properly thorough fashion.

This is different from The Quiet One and The Stoic. The character in the grip of Tranquil Fury isn't necessarily an emotional cripple, and in day to day life they may be perfectly normal and happy. What defines Tranquil Fury is the tendency to become deadly serious when it gets deadly serious.

Tranquil Fury is often preceded by the phrase "I didn't want to have to do this" or something similar. A loose real-life equivalent would be the concept of mushin

. Typically, a Meditation Powerup invokes or results in such a state.

Compare and contrast: Suppressed Rage, Dissonant Serenity, Villainous Breakdown, and Beware the Quiet Ones. These characters often use Creepy Monotone, Death Glare, and Slasher Smile. When Good Is Not Soft, the most brutal examples of its wrath will often take this form.

Cartman ruins his therapist's life after a barrage of fat-related insults.

Cartman ruins his therapist's life after a barrage of fat-related insults.