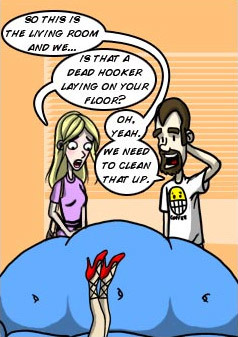 Archer: Oh my god, you killed a hooker!
Cyril: Call girl! She was a—
Archer: No, Cyril! When they're dead, they're just hookers!
— Archer
Advertisement:

A subtrope of Death by Sex which specifically guns after ladies of the night. Want to stress how depraved and vicious your killer is? Have him — it's almost always a man — target and/or kill a few sex workers — and they are nearly always women — to drive home the fact. Maybe it's because walking the streets is a dangerous occupation and the ladies involved tend to make easier targets for weirdos. Maybe it's because sex workers are sometimes viewed as Acceptable Targets. Maybe the prostitutes are killed because they know something they shouldn't, or a villain thinks they do. Or maybe it's just easy shorthand to let people know there's a Serial Killer loose out there, but the sex industry tends to have a high percentage of casualties when it comes to this kind of thing. And they will nearly always be forgotten by the story eventually.

This is, in some ways, a Truth in Television. Prostitution (especially of the street-walking variety) carries with it a certain amount of danger by its nature, as the ladies occupy a gray area in society outside of the law, often being ignored both by the law and society at large as a result, and must by necessity place their trust in strangers whose intentions may not be benign. Simple practicality on the killer's part is often a factor: prostitutes do, after all, make their living by accompanying clients to places of the Johns' choosing, without drawing witnesses' or authorities' attention to their rendezvous. In all too many cases, women in the sex industry may be a Real Life Serial Killer's first/only victims.note Indeed, it's not uncommon for the Serial Killer to specifically target prostitutes and actually believe that he's doing society a favor by killing them.

In many cases regarding their depiction, however, there is an unfortunate sense that the ladies in question are being somewhat... dehumanized in the process. The unfortunate ladies who fall victim to the killer are rarely given any kind of character outside of their profession. If they are lucky, we'll learn their name(s), and if the producers really want to hammer it home how far they're fallen we'll probably get some sense of their home life (which will no doubt contain some kind of drug addiction, abuse, or even a child raised in poverty). They will usually be a vaguely formed Hooker with a Heart of Gold at best, someone with a conveniently tragic reason to be targeted by a serial killer.

Sometimes we don't even get that; we just get a string of nameless dead hookers. There can also be a sense that these women have it coming or somehow deserve what happens to them because of their circumstances; the detectives involved may be dismissive or even contemptuous towards the victims and the other women in the same position because of their profession. This can be especially glaring if the killer then targets a woman who is not a prostitute. Whereas the victims from the sex industry may be casually dismissed as victims who "had it coming," the non-sex worker victim will be treated as an innocent whose death is a tragedy and must be avenged. Similarly, if a dead woman is mistaken for a sex worker, then her death might be initially dismissed, only for everyone to pick up and work their damned hardest to solve the case once it's revealed that she's actually an 'innocent'.

The Disposable Sex Worker has an odd mixed relationship with Missing White Woman Syndrome. On one hand, they're mutually exclusive due to sex-worker victims not being "wholesome" ladies (especially if they're minorities compared to a white "normal" victim). But on the other hand, male and transgender female sex workers are almost never given mention in fiction or real life, despite being just as likely or even more so to be victims of violent crime, but with authorities even less likely to care.

Disposable Vagrant is often the male counterpart. Contrast like hell with Platonic Prostitution.