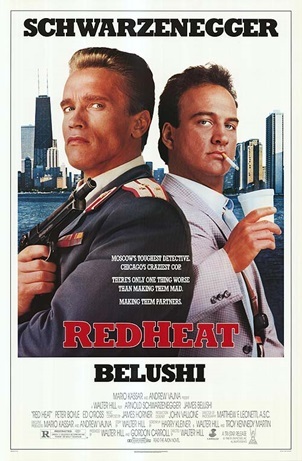 Moscow's toughest detective.
Chicago's craziest cop.
There's only one thing worse
than making them mad.
Making them partners.
Ridzik: About this pile-of-shit pimp in here. In this country, we try to protect the rights of individuals. It's called the Miranda Act, and it says that you can't even touch his ass.
Danko: I do not want to touch his ass. I want to make him talk!
Advertisement:

Red Heat is a 1988 buddy cop/crime/action film directed by Walter Hill and produced by Carolco Pictures.

After failing to catch Georgian drug dealing gang leader Viktor "Rosta" Rostavili (Ed O'Ross), who shot his partner in the process, Soviet police agent Ivan Danko (Arnold Schwarzenegger) is tasked to follow Rosta into the United States and bring him back. In Chicago, Rosta escapes custody and Danko is forced to partner with a laid-back and cocky detective, Art Ridzik (James Belushi). They both have to learn to work together in order to find and neutralize Rosta, which isn't helped by the Culture Clash Danko experiences, especially about law enforcement methods.