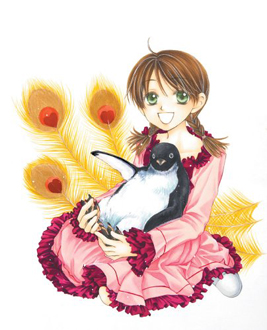 That one time when they took me to the theater as a child, I saw, of all things, a beautiful pair of wings on the leading actress. ... It seems that nobody else could see the wings. But if I'm not careful, I get drawn in by the wings, entranced to the point where I don't do anything else. Actually, from the first time I saw them, I had this idea that they were... the mark of a star!
Advertisement:

Yes, Everything's Better with Penguins. But this isn't about that.

Yukari Fujimaru's dream is to have a steady job as a civil servant. At sixteen, she's been though the rags to riches cycle more times than she can count thanks to her father's unreliable business sense, and all she wants for herself is the stability of a regular paycheck. However, Yukari has the ability to recognize a potential star talent by the beautiful, shining wings she can see on their backs.

When she sees a small pair of such wings on her classmate Ryoko Katsuragi, Yukari considers suggesting to her that she might be cut out to be a star. Then, by accident, she discovers that "Ryoko" is actually a boy, Ryo, in disguise. Soon Yukari finds herself caught up in show business and the eccentric Peacock talent agency, acting as Ryo's manager in an effort to make both of their dreams come true.

It's not going to be easy, because not only does Yukari have to juggle schoolwork and finding jobs for Ryo, she has to pretend to be a man. And live with Ryo and his odd but extraordinarily talented roommate. And if her secret gets out, she and Ryo both get fired.

Penguin Revolution is a manga by Tsukuba Sakura, who also wrote Yoroshiku Master, Land of the Blindfolded, and several one-shot manga. The manga was serialized in LaLa from 2005 to 2007.