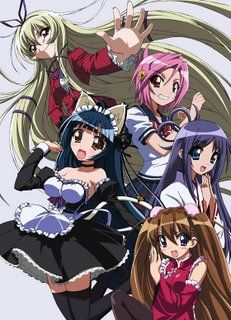 This is the world of Penguin Musume♥Heart. Adapted from the Penguin Musume manga running in Champion Red, it's one of the few anime to air completely online. No episode exceeds 14 minutes (counting the OP and ED), and new episodes went at 12:00 Japan Time on Saturday at http://pen-musu.jp

(sometimes earlier for users of Nico Nico Douga, a Japanese YouTube analogue) Each episode follows Sakura (alias "Penguin"), her True Companions and whatever comedy can fit into that short span of time. The web series ran for 22 episodes, all of them available at the previous link.

By the way, IOSYS of Touhou Project fame (specifically ARM) composed one of the ending songs.