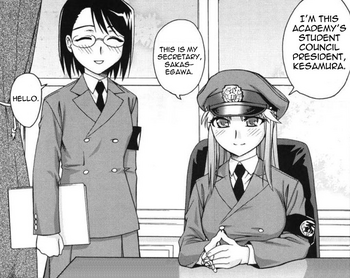 Depending on the series, he or she may be a Supporting Leader, the Alpha Bitch, the Big Bad, Messianic Archetype, The Ojou, Sheltered Aristocrat, a Magnificent Bastard or just another student. Note that some of these tropes can overlap.

The British version (in certain schools) is the Head Boy/Girl, who's in charge of the prefects (student volunteers with various roles). The stereotype is for them to be either a nigh-perfect Big Man on Campus Renaissance Man/Woman, or the toadying epitome of the Teacher's Pet, and either way to be destined for a career in politics. Mixed schools may have one of each, who may or may not be a Ruling Couple.