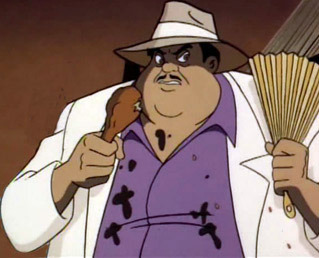 He's six foot one way, two foot the other
And he weighs three hundred pounds
His coat's so big, he couldn't pay the tailor
And it won't go halfway round
— Description of a slaveowner from Kingdom Coming, Henry Clay Work
Advertisement:

Like Dastardly Whiplash, this is an oddly specific character. Often a villain, or at the very least extremely shady, the Fat, Sweaty Southerner in a White Suit is where the Corrupt Hick intersects with the Villainous Glutton. They are always obese. They always speak with a strong Southern accent, normally an upper-class drawl. They are almost always dressed in a white suit, cane optional. If it's not truly white, it'll be pale enough to have the same effect. If it's someplace in the Deep South, like Mississippi or Louisiana, they will be extremely sweaty and constantly dabbing themselves with a handkerchief when not lazily fanning themselves. This is optional in places like Kentucky, but they will occasionally manage to be sweaty even in an Appalachian winter.

The root of the stereotype is in actual Southern fashions, combined with negative stereotypes of plantation owners. The white suit was an enduring Southern fashion down to the '70s, and can still be seen to this day because the South is hot, not to mention humid. The best such suits were made of linen, which is naturally moisture-wicking and highly thermally conductive; the next-best quality was seersucker, a cotton weave in which most of the cloth stays away from the skin. (Seersucker suits are fashionable to this day in Washington, D.C., which is very much a part of the South's subtropical climate zone.) Being white meant that the suit reflected light, and so didn't get hot as fast as other fabrics; it also allowed its wearer to show off that he didn't have to do anything that would get his clothing dirty.

Historical figures who sported the Southern white suit included Mark Twain and Colonel Harland Sanders, but neither of them was particularly fat or particularly villainous, unless in the latter's case you asked the chickens. Mark Twain's satires of Southern aristocracy might have been the Trope Codifier here.

The villainous version is a shameless glutton; the usual objects of his gluttony are mainstream Southern foods (sweet, fatty dishes which originated in the wet, cold, rainy Scottish Lowlands, and were definitely not adapted to suit the wet, hot, rainy Southern ones), but he's often found in association with gumbo, suggesting that he may have Cajun origins.

He occasionally has Jabba Table Manners and often has a careless, laid-back manner. He's probably Nouveau Riche and quite possibly a Corrupt Hick; he's almost certainly not an aristocratic, genteel, warlike Southern Gentleman.

He might be rich by anyone's standards, or he might just be better off than the rural poverty that surrounds him. One way or the other, he can afford very large quantities of very good food, and it's not at all unlikely that he gets the money from being part of, or the leader of, a corrupt local government.

One occasionally sees an uncorrupt or out-and-out heroic character of this sort. They sometimes sell food; at other times, they, like the Southern Gentleman, are lawyers.

For non-fat, non-sweaty, non-Southerners who may have a different set of villainous characteristics, see Villain in a White Suit. For Southerners too blue-blooded to sweat, see Southern Gentleman. For characters who are more powerful and even less genteel, see Corrupt Hick (remembering that there's a lot of overlap). For villains who eat a great deal, Southern or not, see Villainous Glutton. And for other stereotypes of the obese, compare and contrast Fat Bastard, Fat Idiot, and Fat Slob.