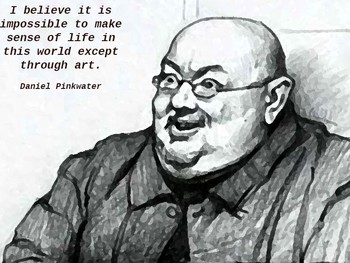 One part Marx Brother, one part cracked social satirist... with a particle of werewolf thrown in. I am a sandwich!
— Pinkwater Podcast intro
Advertisement:

Daniel Manus Pinkwater (born November 15, 1941) is an American author of children's books. His books have a number of recurring themes, including:

He tries to use a different version of his name — such as D. Manus Pinkwater, Daniel M. Pinkwater, D. Pinkwater, and so on — on every book he writes, allegedly to annoy librarians.

He was a important component of the radio show Chinwag Theater for a while, being that his books were read and he was the one who read them. He also reads children's books on NPR with Saturday Morning Edition anchor Scott Simon. He also used to call in to Car Talk to expound on a car-related topic with Click and Clack when that show was still making new episodes.

Pinkwater books with their own pages:

open/close all folders
The Education of Robert Nifkin
Robert Nifkin starts high school at Riverview High in Chicago, which he finds intolerable. He drops out, and is able to attend Wheaton Academy, a private school full of freaks and weirdos like him. The book is semi-autobiographical and much more realistic and cynical than most Pinkwater books.
Fat Men From Space
Earth is invaded by aliens who look like fat men, and steal all the junk food on the planet.
The Last Guru
Harold Blatz parlays a horse-racing bet into a stock market fortune, becomes the richest person in the world, goes to Tibet, and finds enlightenment.
Magic Moscow Trilogy
A series of three books consisting of The Magic Moscow, Atilla the Pun and Slaves of Spiegel. The books chronicle the adventures of Norman Bleistif and his friend Steve Nicholson, who employs Norman at his hybrid junk food/health food restaurant called The Magic Moscow in Hoboken. In The Magic Moscow, Steve's becomes obsessed with a TV show about a crime-solving dog, and the TV plot gradually bleeds into their lives. In Attila the Pun, Norman and Steve make friends with a psychic and become entangled with ghosts. And in Slaves of Spiegel, the fat men from ''Fat Men From Space'' arrange for a literal Cooking Duel between the three best junk-food chefs in the universe.
The Worms of Kukumlima
A boy and his grandfather go on quest to find the sentient earthworms of the lost Kukumlima Crater, and find more than they bargained for.
Yobgorgle: Mystery Monster of Lake Ontario
A kid goes to search for a sea monster in Lake Ontario, and instead finds The Flying Dutchman on a submarine who needs help to break his curse.
Young Adult Novel
The Wild Dada Ducks are a group of high school students who love spreading the message of Dada and writing short stories about Kevin Shapiro, Boy Orphan. Once they find out there is an actual Kevin Shapiro in the school, they use their Dada skills to make him as successful as possible. There is also a sequel, Dead End Dada, in which the Wild Dada Ducks abandon Dada in favor of Zen.

The Pinkwater Podcast, which ran from 2008 to 2017, serializes Pinkwater's audiobooks interwoven with music and other interludes. The podcast is hosted by Pinkwater's webmaster and aspiring doctor Webmaster Ed, with Pinkwater himself appearing frequently in cameos, usually playing a character or otherwise in disguise. The podcast often showcases obscure or out-of-print Pinkwater works.