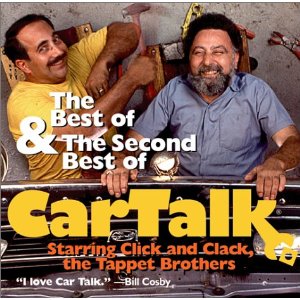 The single most popular show produced by NPR, Car Talk (pronounced "Caah Tawk") was a long-running weekly radio broadcast about automotive repair hosted by the wisecracking brothers Tom and Ray Magliozzi (also known as "Click and Clack, the Tappet Brothers"), proprietors of the Good News Garage in Cambridge, Massachusetts.

Listeners would call innote actually, listeners called in and reached a 24-hour answering service where they were pre-screened, but the brothers wouldn't hear the problems beforehand; the reason for it is that NPR stations wouldn't all broadcast the show at the same time and describe the problems with their vehicles. The brothers would crack wise, make fun of themselves, each other, and the listener—especially when the caller tries to reproduce the weird sound the car has been making—and oftentimes come up with plausible answers and solutions for the caller to investigate.

The show also featured funny or interesting letters from listeners, and a weekly brainteaser. Like Top Gear, it had a following that went beyond car nerds, people in need of car advice, or people who even owned cars.

The brothers made Cameos in the Pixar films Cars and Cars 3note Since the movie came out in 2017, Tom's lines were taken from clips from the first film and segments on Car Talk as Rusty and Dusty Rust-Eze. They also made an appearance on Arthur as Furry versions of themselves.

In June of 2012, the brothers announced that they would be retiring from Car Talk in September, ending a thirty-five year run. NPR has continued airing the show via reruns, as well as calls that weren't used in the show before, however. The Powers That Be said they won't run out of never-aired material for years, and they were right. It wasn't until 2021 that they started airing reruns from The '90s ("When Yugos roamed the Earth" according to Ray).

Tom Magliozzi died of complications from Alzheimer's disease ("He really couldn't remember last week's Puzzler after all" —Ray) in November 2014. As a result, the show is run as The Best of Car Talk; Ray still records a few new sponsor messages in retirement (e.g. getting up for a spot for Serial Season 2 in 2015), but otherwise, the format remains as before.

- And even though it makes Garrison Keillor sing like Justin Bieber every time he hears us sayin' it, this is TV Tropes.