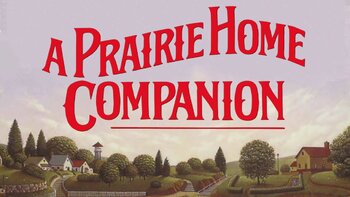 Oh hear that old piano from down the avenue
I smell the onions note (frequently replaced with another odorous object, often coffee), I look around for you
My sweet old someone coming through that door
It's Saturday and the band is playing
Honey, could we ask for more?
- Garrison's opening song for every show
Advertisement:

One of the more popular old-time radio variety shows still in existence, Public radio'snote The show mostly airs on stations that are members of NPR but is not produced or distributed by it A Prairie Home Companion (re-branded as Live from Here in November 2017 after Keillor's firing, a year after handing over the reins to Chris Thile) was created by Garrison Keillor in 1974 and continues to broadcast faithfully from St. Paul (or Minneapolis, and various other locations in the U.S. and abroad) every Saturday to a totally loyal audience. It's popular for several reasons, chiefly nostalgia for the good old days of radio—which this is very, very evocative of—and Keillor's distinctive comedic style.

Though the guest stars and location vary, the segments almost always included are:

In 2015, Garrison Keillor announced he would be retiring, again, following the 2015-2016 season, with "The America the Beautiful Tour" as his Grand Finale. He was replaced as host by Chris Thile, formerly of Nickel Creek and Punch Brothers, who has been featured on the show on-and-off for 20 years. (Keillor had already retired in the late '80s, then did annual reunion shows often enough that he just decided to resume doing the show on a weekly basis, and announced his retirement again in 2011, saying he would retire "within two years", only to change his mind once more, hence the word 'again' in this paragraph's first sentence.) Keillor's final broadcast from APHC's "home" venue (the Fitzgerald Theatre in St. Paul MN) took place on February 27, 2016, while his final final show was recorded at the Hollywood Bowl on July 2.

Thile's tenure on the show has been characterized by increasing the focus on music while dialing back on the show's old-timey timelessness, the show is now more willing at making contemporary references and even joking about politics. Also, some of the segments, such as "News from Lake Wobegon," were retired as they were considered to be too intimately tied with Keillor's persona to survive a shift to a new host.

In November 2017, the show was renamed Live from Here after Keillor was fired from Minnesota Public Radio for allegations of workplace harassment. Furthermore, MPR stopped rebroadcasting all past shows starring Keillor and removed all his shows, including Writers' Almanac, from their online archive. In April 2018, MPR reached a settlement with Keillor

and restored the archive. Because Keillor, not MPR, holds the rights to his shows, he has expressed interest in reviving them

The radio show was adapted into a film (famed director Robert Altman's last) in 2006 - starring an Ensemble Cast and Garrison Keillor As Himself - which was generally well-received. It has its own page here.