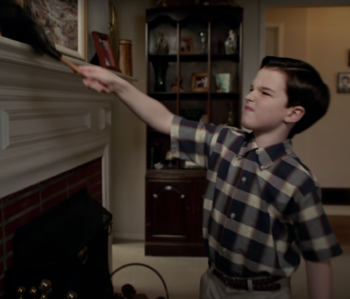 "You know what I did when Pete died? Polished silver. Three nights straight, till daybreak — over and over and over."
— Vivian Dimitri, Columbo, "Rest in Peace, Mrs. Columbo"
Advertisement:

This trope is the act of performing domestic chores in anger or because of sadness or anxiety. Doing chores can release strong feelings and provide relief from anger or suffering.

A good thing to do when characters in fiction need to vent their frustration or relieve stress is to actually do something useful. Their home — be it a house or flat — and their yard, garage, or garden offer countless possibilities. They can beat carpets, vacuum, polish windows or mirrors in angry rapid movements, chop vegetables, wash up, clean the bathroom or scrub the floors spotless. They can weed or hoe their flower beds, prune their plants, or sweep the yard.

When angered, the characters receive an energy boost and they might finish their chores quite soon. Sometimes however if they are absolutely furious, they might be so vigorous in their effort that they happen to smash the things they are supposed to clean or organize. For example, if they start putting stuff in the dishwasher, they must be careful not to slam cups, glasses or plates too hard because these might break easily. If they are stressed and suffer from anxiety, routine and repetitive movements can offer some relief and help a great deal.

In the best circumstances, cleaning, organising and finishing their chores help the stressed characters. Their anger or stress level gradually diminishes or disappears entirely. Best case scenario: they're so satisfied with the clean kitchen or yard work done that they don't remember what angered or stressed them in the first place. The fact that their chores are done might help to calm them down and make them actually feel better. However, if the cause of their problems is still on, they might get angry or anxious again pretty soon.

The trope also covers the situation when an adult tells a kid to do their chores, and they start doing said chores in anger or while sulking.

Related to Cope by Creating, Kids Hate Chores, and Percussive Therapy. Closely related to Distressed Woodchopping. It can overlap with Looking Busy if they choose to do chores that are not actually needed — things like washing clean things or scrubbing things senselessly over and over.