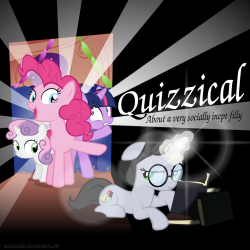 Quiz is not good with parties.
Advertisement:

is a My Little Pony: Friendship Is Magic fan fiction written by JMac

Quizzical Greystone is Twilight Sparkle's new research assistant. She may also be the most introverted pony ever. Can researching the magic of friendship help Quizzical break out of her shell?

It has three sequels:

There are also 6 one shots:

And this crossover with Equestrian Fanfiction:

Spike hurried home to the library to find a parchment and a quill. He had to send a letter.