Our Sphinxes Are Different 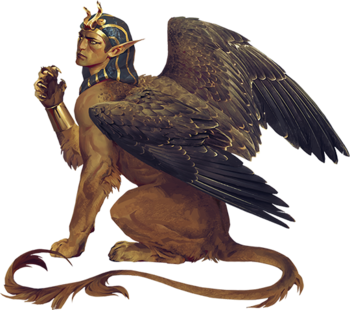 Throughout the multiverse, sphinxes are enigmatic beings. Some are merely monsters with inscrutable motives, while others guide entire civilizations towards goals only they understand. No matter the world, a sphinx is a mystery given form.
— The Riddle of Origin

The sphinx (also spelled sphynx, pluralized sphinxes or sphinges) is a creature hailing from Mediterranean myths, and remains a common feature in modern fantasy worlds. Sphinxes originated in Egyptian and Classical Mythology, and are as such strongly connected with Greek and Egyptian settings and Fantasy Counterpart Cultures.

Sphinxes are typically associated with knowledge in some form. They're often depicted as driven to ask riddles to others, often with dire consequences for those who won't or can't guess correctly. Associations with magical lore and oracular powers are also fairly common. They're usually powerful, rare and magical beings; regardless of their specific role in a story, sphinxes are rarely trivial creatures.

, the striped headcloth worn by Egyptian pharaohs. The most common alternative types are ram-headed sphinxes, called criosphinxes, and hawk- or falcon-headed ones, called hieracosphinxes. Sphinxes with other animals' heads are rare, but not entirely unheard of, and don't generally have universal names. All variants may or may not be winged. In general, human-headed sphinxes are more likely to be mystical and refined, while animal-headed ones are more likely to be bestial and aggressive.

It's worth noting that the Greek and Egyptian sphinxes behaved differently. The Greek sphinx was a single one-of-a-kind monster and enemy of mankind sent as a plague by Hera to punish Thebes, and was the one that asked the infamous riddle and was bested by Oedipus. Egyptian sphinxes were a myriad of creatures and statues representing deities, protectors and pharaohs, and could be male, female and animal-headednote It also should be noted that Egyptian sphinxes are much older — we're talking at least a full millennium — than the Greek version. As noted below, they obviously weren't called "sphinxes" but what they, especially the Great Sphinx, were called have been lost to time. The common image of a sphinx in modern-day media is a mix of the two, taking the Egyptian theme and appearance but the Greek behavior.

See also Beast with a Human Face; Our Manticores Are Spinier, for another type of leonine creature which may or may not have human heads and/or wings; Our Gryphons Are Different, to which hieracosphinxes may sometimes be linked to and often resemble; and Shedu and Lammasu, for creatures with similar appearances, connotations and preferred stomping grounds.

The famous riddling monster of legend, found in an ancient ruin south of Lake Kopais in the Boeotia region.

The famous riddling monster of legend, found in an ancient ruin south of Lake Kopais in the Boeotia region.