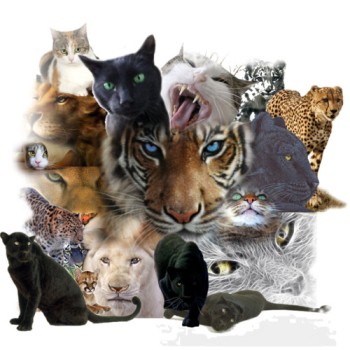 Soft kitty, warm kitty,
little ball of fur...
Happy kitty, sleepy kitty,
purr, purr, purr...
"The fat cat on a mat may seem to dream
Of nice mice that suffice for him or cream
But he free, maybe walks in thought unbowed, proud
Where loud his kin, lean and slim or deep in den
Feasted on beasts and tender men.
The giant lion with iron claw in paw
And huge ruthless tooth in gory jaw;
The pard dark-starred, fleet upon feet,
That oft soft from aloft leaps on his meat
Where woods loom in gloom
Far now they be, fierce and free, and tamed is he;
But fat cat on the mat kept as a pet he does not forget"
— J. R. R. Tolkien, The Adventures of Tom Bombadil, "Cat"
Advertisement:

This is the purr-fectly cat-related trope index. For more reality-based information about meowing, see the Useful Notes page on Cat Communication.