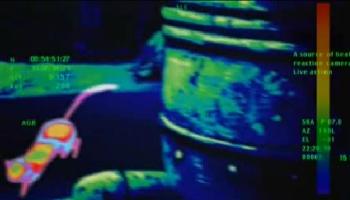 Hint: The hero is hiding on the right.
Advertisement:

It often happens that during a Chase Scene, the protagonist hides behind a garbage can, empty container, or another large object, hoping that the bad guys won't notice their presence. During this critical stage, the hiding protagonist usually makes a noise that attracts the bad guys. Everything seems to be doomed until...

A small animal — almost always a cat, but it can also be a mouse, squirrel, raccoon, bird, etc. — appears just next to him and distracts the bad guys, who then completely dismiss the spot where the hero was, and move on. Hurray! Our heroes are saved!

Related to It's Probably Nothing and Nobody Here but Us Birds. Compare Conveniently Timed Distraction when it's not an animal causing the distraction. One of many Escape Tropes.

Can overlap with Blind Alley.