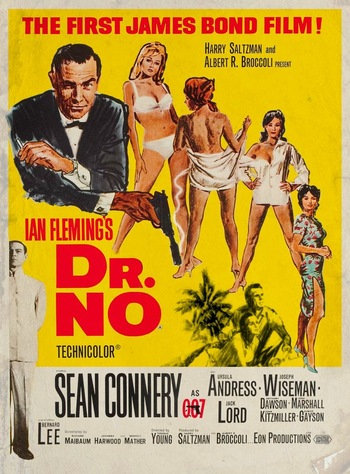 Dr. No is the first James Bond film in the Eon Productions series, directed by Terence Young and starring Sean Connery. It came out on October 7, 1962 in the UK and had limited releases in the US in 1963.

After a British agent and his secretary are murdered in Jamaica and their files about the mysterious Dr. No are stolen, James Bond, codename 007, the best MI6 agent, is sent to investigate.

As the first film of the series, Dr. No was produced on a low budget, and it lacked some of the traits that would become iconic about the franchise, but it nonetheless set the groundwork.

Followed by From Russia with Love.

Dr. No contains examples of: