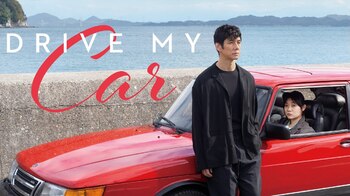 "But even if you think you know someone well, even if you love that person deeply, you can't completely look into that person's heart. You'll just feel hurt. But if you put in enough effort, you should be able to look into your own heart pretty well. So in the end, what we should be doing is to be true to our hearts and come to terms with it in a capable way. If you really want to look at someone, then your only option is to look at yourself squarely and deeply."
—Kôshi Takatsuki
Advertisement:

Drive My Car (ドライブ・マイ・カー) is a Japanese drama directed by Ryusuke Hamaguchi, and written by Hamaguchi and Takamasa Oe, based on the short story of the same name by Haruki Murakami.note There are also elements from two other stories by Murakami - "Kino" and Scheherazade" It stars Hidetoshi Nishijima as Yusuke Kafuku, a popular theatre actor and director married to Oto (Reika Kirishima), a screenwriter. Their marriage, strained by the loss of a child and rumors of infidelity, comes to a shocking and unexpected end.

Two years later, Kafuku is invited to direct an ambitious multilingual stage adaptation of Uncle Vanya in Hiroshima. Upon his arrival, and much to his chagrin, Kafuku is assigned as his chauffeur Misaki Watari (Tôko Miura), a stoic woman who is nonetheless a skilled driver. Beginning with his habit of rehearsing during the long commute from his residence to the rehearsal space, Kafuku and Watari's relationship begins to deepen and develop as secrets and confessions begin to be shared between them.

The movie premiered at the 2021 Cannes Film Festival, where it won three prizes including Best Screenplay. It was chosen as Japan's submission for the Academy Award for Best International Feature Film. The movie was given a limited release in the United States beginning on November 24, 2021. The trailer can be seen here

Drive My Car provides examples of: