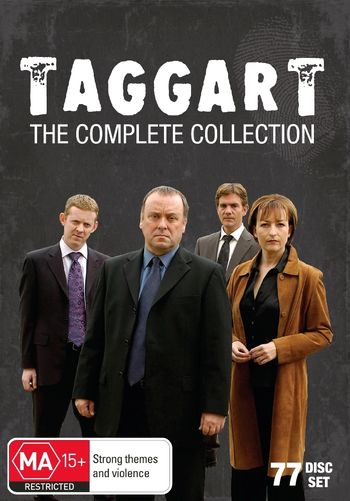 "There's been a murder".
Advertisement:

A long-running British detective series, running from 1983 to 2011 (ITV have withdrawn their funding and until/unless STV can get a replacement backer, we have to call this show cancelled).

Set in Glasgow, Scotland, it had a very bad case of Never One Murder. The series was named after its original main character, Jim Taggart, who was killed off due to the death of Mark McManus, who portrayed him. Rather surprisingly, the show carried on longer without him than it did when he was alive.

According to The Other Wiki, the show is frequently summed up by saying "murder" in a very strong Glaswegian accent (e.g. a parody in The Fast Show consisted entirely of policemen standing around a corpse and saying "He's deeed, he's bin mudded!").

Like The Bill for Britain as a whole, every Scottish actor worth their salt has had a role on this show at some point. Except for, of all people, David Tennant, who failed the audition fourteen times.

Not to be confused with Dagny or James Taggart.