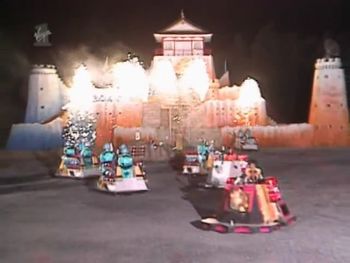 Takeshi's Castle is one of the maddest shows on the planet. It was originally broadcast in Japan from 1986 to 1990, where it proved a hit. Then in the 2000s it was syndicated internationally and became a massive hit everywhere else. It was to Japan what The Crystal Maze was to the United Kingdom, or what Fort Boyard was to France. Except this turned the wackiness to a(n) (un)considerable degree.

100-140 (or maybe possibly more) Japanese contestants (Or international, depending on what episode it is) take part in a series of madcap challenges, hosted by Japanese actor/comedian Takeshi Kitano. He envisioned it as a live action Super Mario Bros. game, and this became increasingly evident as the budget grew.

Challenge (who do the UK version) reportedly only bought this in 2002 as a weekend filler, with Craig Charles doing very humorous commentary. One hundred and twenty-two regular episodes, ten double-length specials and twelve "Best Of" specials were produced from the source material, which says something about how popular it became. A Revival, Takeshi's Castle Rebooted, with unused material started on Challenge in 2013, with Dick & Dom replacing Craig on commentary.

The show was wildly popular in Spain, where was known as Humor Amarillo.note Translates to Yellow Humor It was broadcast twice in ten years, with the second one becoming the most succesful thanks to its commentary, which reinvented the show by making up over-the-top characters and stories out of the original material. It was more of a reinterpretation of the old show than an exact retake, but nonetheless the audience loved it.

The show was (and still is!) insanely popular in India (of all the places!) where the commentary for it was given by local comedian Javed Jaffery, who in a remarkably good case of Woolseyism, managed to preserve almost all the jokes and snarky commentary verbatim while translating it into Hindi. It was syndicated on POGO where almost all the episodes were shown. As of 2019, it's still being aired — ever since its introduction in 2008 (!!).

The show is also popular in Italy, where it was brought there with the famous prime-time show Mai Dire Banzai,note Translates to Never Say Banzai together with fellow game show The Gaman. Both shows received huge popularity in Italy, and Takeshi's Castle received numerous Italian Gag Dubs. Some of the challenges were even readapted in other Italian shows such as Ciao Darwinnote Translates to Hello Darwin and Mezzogiorno In Famiglia.note Translates to Family Midday

It was adapted for CBS in 1993 as a one-shot special, Storm the Castle.

The ultimate aim of the game is to storm the eponymous castle. This has only ever been accomplished once in the Challenge version— the prize, which had been the subject of much speculation up to that point, was revealed to be a small box. Craig Charles speculated that it contained the contestant's teeth. In fact the prize for storming the castle was ¥1,000,000 (which was about $8000 or £5000 back then) which was won nine times overall.

In 2014, the show was given a Thai adaptation (Takeshi's Castle Thailand). In late 2017, it was announced that Comedy Central (with the exception of the American, Canadian and Japanese versions of the channel) had obtained the rights to air the Thai version, with Jonathan Ross acting as the UK version's commentator this time round.

As of April 2022, it has been reported that Takeshi Kitano and Amazon Prime Video are working to launch a revival of the show in 2023.

One of the games in Takeshi's Castle is human skittles, where after picking from a card, showing where they have to stand in a bowling triangle, have to avoid being knocked over by the Emerald Guards.

Example of:
Bowled Over

One of the games in Takeshi's Castle is human skittles, where after picking from a card, showing where they have to stand in a bowling triangle, have to avoid being knocked over by the Emerald Guards.