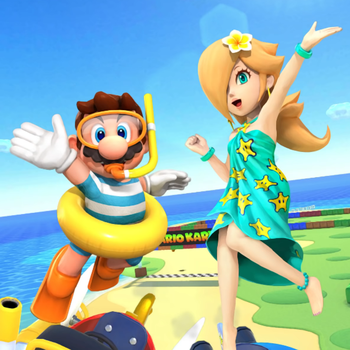 Or in this case, beach tournament!
Art: Why does every anime series under the sun have to have a fan-service episode? An episode in which the cast all wander around in swimwear or less for no real reason? It's so low-brow.
Pip: Shall we confirm that by watching it again?
Art: Absolutely.
— Sequential Art
Advertisement:

The Beach Episode or Pool Episode is, simply put, an episode where the cast decided to take a break and go to the beach or a swimming pool for some wet and splashy fun.

Often combined with or immediately following a Recap Episode, in a lot of shows, the Beach Episode generally exists solely for the purpose of getting the cast into bathing suits, either for titillation or just because some people want to see what the characters' bathing suits look like. Sometimes the bathing suits can be Played for Laughs if they look similar to the characters' already-Limited Wardrobe's. For example, if Alice generally wears purple, expect her swimsuit to be purple too. In shows that small children can watch as well as the adults (therefore being child-friendly), they have a beach episode because the beach is typically considered fun. Sadly for the fanboys, beach episodes are usually (except for the romance genre in which it is part of the plot) considered extreme examples of filler and treated accordingly. Sometimes you'll meet the Surfer Dude here, and the Muscle Beach Bum. Also a good spot for a random Beauty Contest. Besides having a dip, characters may also hit the nets for a game of beach volleyball. Japanese works might also show them trying to smash a watermelon or two. And since people usually go barefoot at the beach to feel the sand and surf, shoes and socks are usually the first things to go. Even if the cast isn't changing into bathing suits, they'll probably shed their footwear at the very least to avoid being labeled a tourist like the derided "shoobie", so don't be surprised if this happens, and/or this sets up someone to step on something sharp or jagged while barefoot (often followed by a Green Aesop if that something happens to be a piece of beach litter). Also expect some Beachcombing and someone getting buried in sand.

Naturally, it also acts as a Breather Episode in arc-heavy stories. However, it's not uncommon for the episode to be a fake-out breather and suddenly take a serious turn with a dramatic plot twist, such as if a storm hits, a threat from below the deep decides to emerge, or there's a shark attack.

Common in, but hardly limited to, anime series. Often shows up in Side-Story Bonus Art. In anime and live-action television, a Beach Episode might overlap with the Vacation Episode, usually as a trip to a tropical locale. Expect one of the characters, usually a female, to exclaim "It's the ocean!" when the gang first arrives on the scene.

Cousin to the Hot Springs Episode, which usually takes place in highlands. Often, the actual beach also gets replaced by a swimming pool. Also compare Palmtree Panic, which is when (usually) a single level of a video game takes place on a beach.

Note: It sometimes occurs that the Beach Episode is interrupted by the actual plot of the story. For example, the heroes are taking their well deserved beach trip when the villains decide to show up and cause trouble.