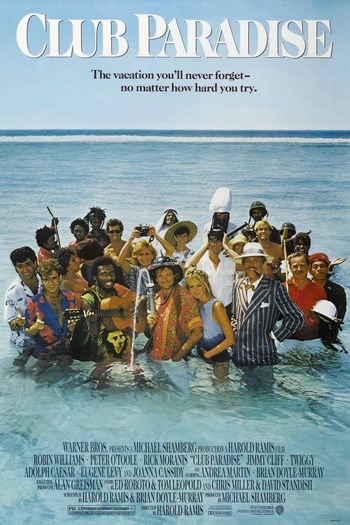 A star-studded 1986 comedy directed by Harold Ramis. After nearly losing his life while saving a dog from a fire, Jack Moniker (Robin Williams) decides to quit his job as a fireman and retire to settle down on an island in the Carribean called St. Nicholas. He meets English governor Anthony Cloyden Hayes (Peter O'Toole), who mentions rumors of a violent revolution.

When Jack stops by at Club Paradise with his girlfriend Phillipa (Twiggy), Ernest Reed (Jimmy Cliff), who isn't just a reggae singer at the club, but owns it, too, is in debt for $6,000 and hasn't paid taxes, leaving him 2 weeks to pay or else he'll lose the club and the hotel. Jack helps out by taking photos for advertising, which, however, is false, but it did pay taxes, but Hayes won't take this sitting down as he, along with some other greedy businessmen, want to put more resorts on St. Nicholas.

After the plane's pilot (Joe Flaherty) goes crazy upon landing on St. Nicholas, the passengers vacationing get off the plane. Among the passengers are a married couple named Randy and Linda White (Steven Kampmann and Andrea Martin), who are on the rocks and two guys named Barry Nye and Barry Steinberg (Rick Moranis and Eugene Levy respectively), who plan to win over two ladies by getting enough pot to satisfy the four of them.

As Jack tries to do his best with the resort, hi-jinx ensues, and sooner or later, he and Ernest are in trouble.

The critics weren't kind to this movie, but in Williams' case, he's only 12 years away from even worse movies.